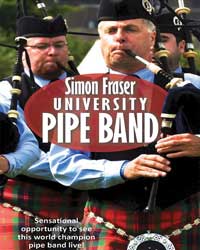 Six-time world champions, as well as North American and Australian Champions, the SFU Pipe Band have continually had success in local, national, and international competitions. Performing concerts at some of world's most prestigious performing arts venues including Carnegie Hall, Sydney Opera House, Glasgow Royal Concert Hall, and Lincoln Center, this band has proven themselves world contenders with live recordings at these venues among its 12 albums and videos. Its members have won all the world's premier solo piping and drumming competitions, including eight Gold Medals, have created the world's largest summer school for piping and drumming "Piping Hot Summer Drummer," and are in high demand worldwide for teaching. This is a performance sure to raise the roof in the HUB International Theatre!