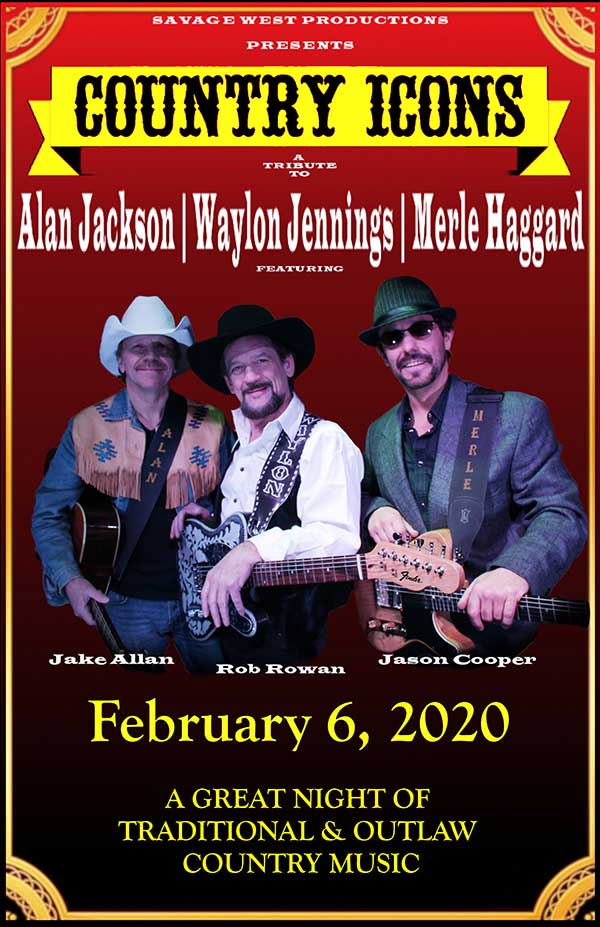 × The Country Icons Show pays tribute to three of the giants in traditional and outlaw country music.

Jake Allan, Rob Rowan, and Jason Cooper are all veterans of the country music industry and have performed in countless Honky Tonks, Casinos and many of the major festivals throughout Canada and the US.

Over the past number of years, these artists have come across numerous country music fans expressing their inability to find great “live” traditional country music. Being huge fans of this genre of music themselves, they decided to produce a show to pay homage to three of their favorites.

This talented and stellar trio of singers combines great musicianship with a little humor to bring you a fantastic show in their tribute to “Alan Jackson”, “Waylon Jennings” and “Merle Haggard”.

Along with numerous standing ovations, they’ve been recipients of great reviews from their audiences. Remarks such as “Awesome show”, “Great band”, “Sounded so much like the real thing”, and “You guys knocked it out of the park” are frequently heard. The Icons love for traditional country music shines through in every performance while being supported by an award-winning group of musicians who never cease to deliver. They always look forward to sharing their passion for this great style of music with other like-minded fans.

Come raise your voice and sing along to these trademark tunes while recalling memories they will conjure up. Join us on Saturday, March 27th at the Chilliwack Cultural Centre in the Hub International Theatre for an unforgettable night of foot stomping country music.